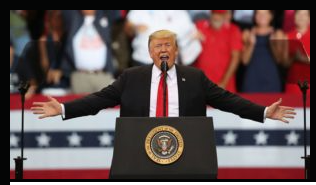 'Cacophony of chaos': why the US election outcome is more uncertain than ever
Recent polls gave conflicting signals in race complicated by crises of public health, economic recession and racial injustice
Sep. 6 - ...The miasma of uncertainty was apparent over the past week when a batch of polls and burst of campaigning gave conflicting signals. Some observers were adamant they showed Biden holding on to a solid lead of seven or eight percentage points, higher than Clinton’s at the same stage, and praised him for displaying both empathy and steeliness in a series of speeches. “5 reasons Biden’s odds of victory look better than ever,” ran a headline in New York magazine on Thursday.

Others, however, detected a shift in momentum and polls tightening, especially in swing states. “Of course Trump can win,” ran a headline in the Washington Post. Film-maker Michael Moore wrote: “I’m warning you almost 10 weeks in advance. The enthusiasm level for the 60 million in Trump’s base is OFF THE CHARTS! For Joe, not so much.” There was panic that Biden has been thrown on to the back foot by Trump’s demand for “law and order”.

The sense of lost bearings is compounded by less traditional metrics, ranging from social media activity – Russian meddling and all – to anecdotal counts of campaign signs in voters’ front gardens to some pandemic-induced tactical wild cards. The Politico website reported last month: “Trump’s campaign knocks on a million doors a week. Biden’s knocks on zero.”

Overshadowing it all are the cascading crises of public health, economic recession, racial injustice and a president waging asymmetric warfare in his willingness to say or do anything to retain power...     source
Trump Denies Report He Called Fallen U.S. Troops ‘Losers’ And ‘Suckers’ | NBC Nightly News
Sep 5, 2020