NOVEMBER 25, 2020
President-elect Biden Delivers Thanksgiving Address
President-elect Joe Biden delivered a Thanksgiving address from Wilmington, Delaware. He acknowledged how tough it is to forego holiday traditions and gatherings due to the pandemic and urged everyone to take necessary precautions to prevent the spread of COVID-19.
Biden calls for unity in fighting COVID-19 in his pre-Thanksgiving speech

Nov. 26 - U.S. President-elect Joe Biden called for a united effort against COVID-19, addressing the country on the eve of Thanksgiving.

His remarks are once again focused on combating the pandemic, as the country grapples a powerful autumn resurgence.
Biden urged people to stay safe by taking precautions -- keeping social distance and wearing face masks.

But he also called for what some may consider a greater sacrifice -- avoiding big family gatherings, as he himself pledges to do so.

"This year, we're asking Americans to forgo so many of the traditions that we've long made this holiday, which made it so special for our families for 40 such years we're going to be having a separate Thanksgiving for Jill and I will be at our home in Delaware with our daughter and our son-in-law."

He also delivered condolences to those who have lost a loved one, saying "I know that this time of year can be particularly difficult. I remember the first Thanksgiving and the empty chair, the silence. It takes your breath away".

Biden had lost his wife and his daughter in a tragic car accident before marrying Jill Biden.

Biden also reaffirmed his victory and transition, while President Trump has yet to make an official concession.

"In America, we have full and fair and free elections. And then we honor the results. People of this nation and the laws of the land won't stand for anything else."

The remarks come as Americans prepare for Thanksgiving as the COVID-19 death toll surpassed a quarter of a million, and hospitalizations saw record highs for the second straight week.

Millions of Americans, despite an anti-travel advisory from authorities, have flocked to airports and highways.    sources 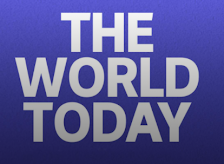 What will Biden Administration mean for Australia?

Nov. 26 - President elect Joe Biden has introduced the top members of his national security and foreign policy team....saying "They embody my core beliefs that America is strongest when it works with its allies."

So what will this new US administration's approach be towards its old ally - Australia - and what clues can we pick up now about how the US might approach its relationship with China?
PBS NewsHour full episode, Nov. 25, 2020
Nov. 26, 2020
Wednesday on the NewsHour, President Trump grants his former national security adviser a full pardon despite his guilty plea for lying to the FBI, COVID-19 cases and deaths break records as millions of Americans travel for the Thanksgiving holiday and President-elect Joe Biden calls for national unity as Trump continues to question the election.
Posted by yy 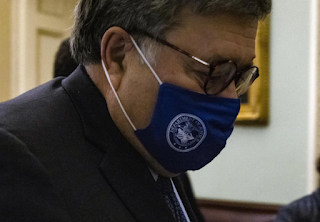 William Barr’s Lame-Duck Execution Spree Is UnprecedentedNov. 24 - Last week, the Trump administration announced that it would continue to carry out executions in the days and weeks leading up to the inauguration of President-elect Joe Biden, with the last one now scheduled just five days before Biden takes office on Jan. 20, 2021. This bloodthirsty decision is another and particularly grotesque way in which President Donald Trump and his Justice Department are defying the norms and conventions for modern presidential transitions.The Death Penalty Information Center reports that the last time an outgoing administration did anything remotely similar was more than a century ago, in 1889. At that time Grover Cleveland, the first Democrat to be elected president after the Civil War and the only president ever to have served as an executioner (when he was the sheriff in Erie County, New York), permitted three executions to proceed in the period between his electoral defeat and Benjamin Harrison’s inauguration in March 1889.     continue to read 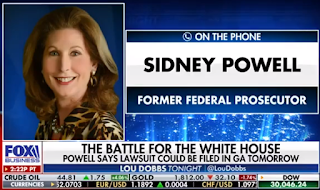 Nov. 24 - Pro-Trump attorney Sidney Powell said the Trump presidency will be "saved" with a "massive" lawsuit in Georgia she plans to drop by Wednesday. Powell contended Trump was "elected in an absolute landslide nationwide" in an interview Tuesday with Lou Dobbs.

"I think no later than tomorrow," Powell said of the lawsuit. "It's just going to be -- it's a massive document. And it's going to have a lot of exhibits."

"Do you think that we're going to see the Trump presidency saved?" Dobbs asked.

"Yes, I definitely do," Powell answered. "There's no issue in my mind but that he was elected in an absolute landslide nationwide."

"There's no doubt that the software was created and used in Venezuela to control the elections and make sure that Hugo Chavez was always reelected as the dictator of Venezuela, in what appeared to be -- quote -- "free and fair elections" -- end quote," she said. "But they were manipulated by the software used in the Dominion machines and used by other machines in the United States, frankly. And we are just continuing to be inundated by evidence of all the frauds here, and every manner and means of fraud you could possibly think of."     continue to read
TUESDAY
November 24, 2020 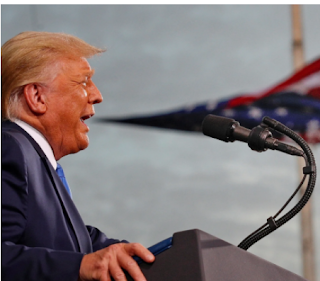 U.S. President Donald Trump tweeted that he is giving the head of the GSA his approval to begin the presidential transition.   © ReutersUS election latest: Trump greenlights presidential transitionBiden picks Yellen for treasury secretary and announces foreign policy teamMonday, Nov. 23 (6:25 pm ET) - The head of the U.S. general services administration, Emily Murphy, sends President-elect Joe Biden a letter saying the presidential transition can begin. This authorization gives Biden access to government buildings as well as $7.3 million in transition funds. President Donald Trump said he had given Murphy the go-ahead despite plans to continue legal challenges."I want to thank Emily Murphy at GSA for her steadfast dedication and loyalty to our Country. She has been harassed, threatened, and abused -- and I do not want to see this happen to her, her family, or employees of GSA," Trump said in a tweet. "Our case STRONGLY continues, we will keep up the good ... fight, and I believe we will prevail! Nevertheless, in the best interest of our Country, I am recommending that Emily and her team do what needs to be done with regard to initial protocols, and have told my team to do the same," he said.     sourceMore on the U.S. election -- and the Asian angle:-- Biden says US needs to align with democracies after RCEP signing-- Three ways Biden will immediately shift US policy on Asia-- Biden affirms security treaty applies to Senkaku Islands in Suga call-- Analysis: Biden's old friend Xi is not the man he once was-- What a Biden victory means for China
Antony Blinken is a longtime Biden confidant who served as No 2 at the state department and as deputy national security adviser in Barack Obama’s administration.Joe Biden to nominate Antony Blinken as US secretary of stateTwo other internationalists, Linda Thomas-Greenfield and Jake Sullivan, also tipped for top jobsNov. 24 - Joe Biden will nominate two veteran diplomats to the top US roles on the world stage – Antony Blinken as secretary of state and Linda Thomas-Greenfield as ambassador to the UN – in a move aimed at sending a message to Americans and allies that the new administration will mark a return to competence and experience.Jake Sullivan, another Democratic insider, will be the new national security adviser, reflecting Biden’s approach of choosing professionals from the foreign policy establishment in preference to business executives and politicians, who were a hallmark of the Trump administration.Blinken was Biden’s national security adviser when Biden was vice-president, and then served as the deputy secretary of state in the last two years of the Obama administration. Sullivan was an adviser to Hillary Clinton, took part in secret talks with Iran that led up to the 2015 nuclear deal, and then succeeded Blinken as Biden’s national security adviser in the Obama White House.Thomas-Greenfield comes from the diplomatic corps, with a career stretching back to Reagan, and rose to become assistant secretary of state for African affairs in the Obama administration. The country’s most senior black diplomat was quickly fired by Donald Trump and his team, who distrusted diplomats, seeing them as part of an amorphous “deep state”.     continue to read 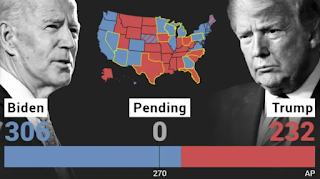 Nov. 22 - Donald Trump faced growing pressure from Republicans on Sunday to drop his chaotic, last-ditch fight to overturn the US presidential election, as victor Joe Biden prepared to start naming his cabinet and a Pennsylvania judge compared Trump’s legal case there to “Frankenstein’s monster”.

Despite Republican leadership in Washington standing behind the president’s claims that the 3 November election was stolen from him by nationwide voter fraud, other prominent figures, including two of his former national security advisers, were blunt.

Former Trump national security adviser John Bolton said that Biden would be sworn in in January and added: “The real question is how much damage Trump can do before that happens.”

The president’s efforts were designed mainly to sow chaos and confusion, he told CNN’s State of the Union show, as a demonstration more of “raw political power” than a genuine legal exercise.     continue to read 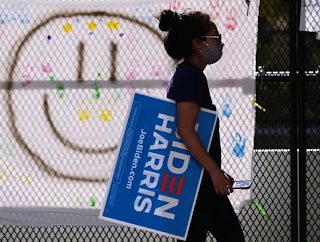 A Biden supporter walks past a happy face sign outside the White House.
Joe Biden

8 December: this is the deadline for resolving election disputes at the state level. All state recounts and court contests over presidential election results are to be completed by this date.

14 December: electors vote by paper ballot in their respective state capitols and also in the District of Columbia, which while it is the seat of the US government, is not actually a state. Thirty-three states and DC have laws or party regulations requiring electors to vote the same way the popular vote goes in the state. In some states, electors can even be replaced or subjected to penalties if they do not toe the line. An elector who doesn’t vote according to who won the popular vote is known as a “faithless elector”. The votes for president and vice-president are counted and the electors sign six “certificates of the vote”. The certificates, along with other official papers, are sent by registered mail to various officials, including the president of the Senate.

23 December: the certificates must be delivered to the designated officials.

6 January 2021: the House and Senate hold a joint session to count the electoral votes. If one ticket has received 270 or more electoral votes, the president of the Senate, currently vice-president Mike Pence, announces the results.

If neither presidential candidate wins at least 270 electoral votes, the House can decide the election, based on the 12th amendment to the US constitution. If required, it would elect the president. That is not going to happen in 2021 – Joe Biden will easily clear the 270 threshold.

20 January 2021: the president-elect is sworn into office on inauguration day. The outgoing president welcomes the president-elect to the White House. Then in a ceremony traditionally attended by all living former presidents, the new president swears the oath of office. This is presided over by the chief justice of the supreme court, which is currently John Roberts.     more details
Posted by yy