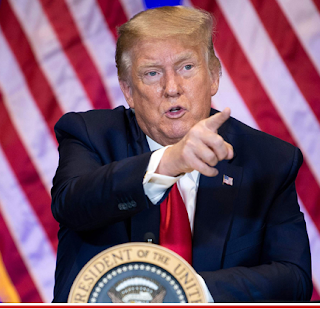 Sep. 13 - President Trump on Sunday made his case to Hispanic voters at a “Latinos for Trump” roundtable in Las Vegas — often at the expense of his Democratic challenger.

“While Joe Biden failed Hispanic-Americans, I’ve delivered for Hispanic-Americans more than any other president,” Trump said. “I’m fighting for you every single day, and you understand that better than anybody.”

Touting his “unwavering devotion” to the Latino community, Trump specifically cited his administration’s cuts of taxes and regulations, and the speed with which the economy has bounced back following the worst of the coronavirus shutdown.

But Trump also picked up where he left off at a Saturday night rally in Reno, Nev., slamming the record of former Vice President Biden.


Filed under 2020 presidential election ,  donald trump ,  las vegas ,  nevada ,  voters ,  9/13/20
Sunday
September 13, 2020
September 13, 2020
President Trump Hosts "Latinos for Trump" Roundtable in Las Vegas
President Trump hosted a ‘Latinos for Trump’ campaign roundtable at the Treasure Island Hotel and Casino in Las Vegas, a property owned by Phil Ruffin, a business partner of the Trump Organization. At the top of the event, President Trump talked about some of his administration’s first-term actions aimed at lowering Latino unemployment. Then the participants, most of them small business owners in the Las Vegas area, talked about why they were supporting President Trump’s campaign for reelection. The roundtable was part of a multi-state swing through Western states, including Nevada, California, and Arizona.

US Presidential Election: 2020 Is Not 2016
Joe Biden will be vilified more and more by the Trump campaign as the election approaches. But this vilification is likely to be confined to inside the right-wing echo chamber.
Posted by yy