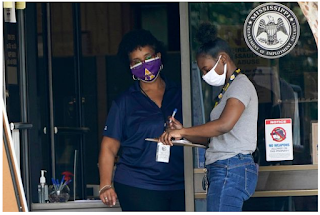 The economy still has a mountain to climb, but it’s digging itself out faster than expected
Households, businesses are figuring out how to cope with coronavirus

Sep. 5 - Is the economy half-full or half-empty? That’s the burning question after a surprisingly upbeat U.S. jobs report for August.

The expiration of federal aid for the unemployed at the end of the July and the still-spreading coronvirus were supposed to put a big dent in the economy last month. But so far the evidence is thin.

To be sure, the pace of the recovery has decelerated. The U.S. is regaining jobs at a slower pace several months after the economy reopened, consumer spending has softened and businesses are still hesitant to invest.

Yet the economy is still expanding and looks likely to continue to do so. More people are going out to eat, states such as New York are easing coronavirus restrictions, schools around the country are trying to start back up and businesses are getting creative in making their premises safer for customers and employees alike.

“The big picture is that even in the face of a summer flare-up in virus cases, the U.S. economy managed to soldier on reasonably well,’ said Douglas Porter, chief economist of BMO Capital Markets.

The coronavirus hasn’t gone away and there’s still no cure, leaving many businesses in the lurch. Restaurants can’t fully reopen, brick-and-mortar retailers are bereft of traffic, airports are mostly empty, hotel rooms are largely unoccupied and the major sports leagues are either playing in bubbles or sharply limiting attendance. Life is far from normal...    source