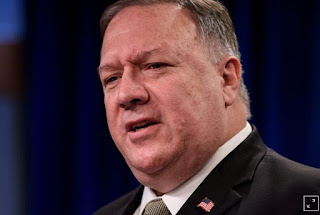 Sep. 12, WASHINGTON (Reuters) - U.S. Secretary of State Mike Pompeo said on Friday the United States is deeply concerned about 12 Hong Kong democracy activists being held in China’s Guangdong province, saying they have been denied access to lawyers and local authorities have not provided information on their welfare or the charges against them.

The United States questions the Hong Kong leadership’s commitments to protecting citizens’ rights, Pompeo said in a statement. The activists were arrested about two weeks ago off the coast of Hong Kong, according to the statement.

At the end of August the provincial Coast Guard Bureau said in a post on its social media site that it had arrested at least 10 people after intercepting a boat off the cost of the southern province of Guangdong. Hong Kong media, citing unidentified sources, said the 12 were headed to Taiwan to apply for political asylum.

Hong Kong Chief Executive Carrie Lam said earlier this week that if they “were arrested for breaching mainland offences then they have to be dealt with according to the mainland laws.”

“We question Chief Executive Lam’s stated commitment to protecting the rights of Hong Kong residents, and call on authorities to ensure due process,” Pompeo said....     more

President Donald Trump has been nominated for a second Nobel Peace Prize - this time for his work in securing a deal between Kosovo and Serbia, two former Balkan war foes.

Sep. 12 - President Donald Trump has been nominated for a second Nobel Peace Prize - this time for his work in securing a deal between Kosovo and Serbia, two former Balkan war foes.

Swedish parliament member Magnus Jacobsson tweeted that he nominated the governments of the United States, Serbia and Kosovo 'for their joint work for peace and economic development, through the cooperation agreement signed in the White House. Trade and communications are important building blocks for peace.'