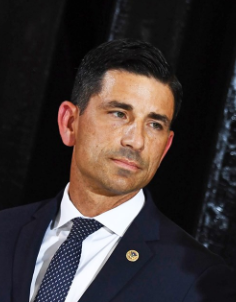 DHS's Wolf: Trump admin 'working on' Black Lives Matter charges
Team Trump will take seriously the possibility of a perceived domestic security threat, but only if it fits into their ideological predispositions.

Sep 1 - ...Fox News' Tucker Carlson pressed the acting Homeland Security chief on possible criminal charges against "the leaders of antifa and BLM." Wolf said he'd spoken directly to Attorney General Bill Barr about this, adding, "I know that they are working on it."

The acting secretary added that the Justice Department is “targeting and investigating the head of these organizations, the individuals that are paying for these individuals to move across the country.” Asked about punishing protest "funders," Wolf went on to say, “Again, I would say that again the Department of Justice, who has the lead in all of those investigations, are certainly moving as quickly as possible."

A few hours earlier, Donald Trump stood at the podium in the White House briefing room and declared, "The Department of Homeland Security and the Department of Justice are announcing a joint operation center to investigate the violent, left-wing civil unrest."