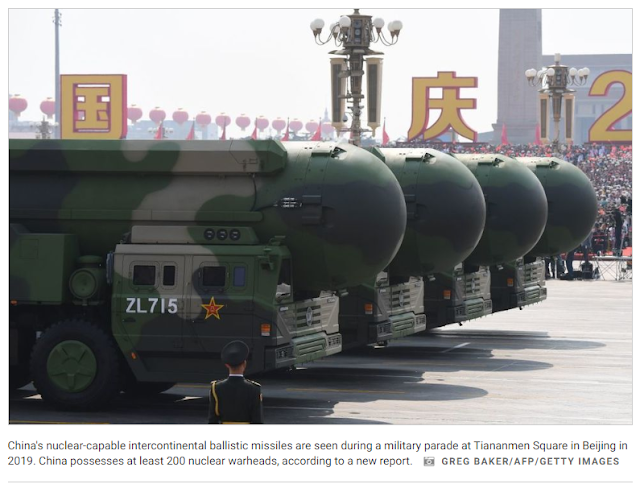 China ramping up nuclear arsenal and missile forces to rival US, Pentagon saysSep. 2 - China is building up its nuclear and missile forces and mobilising vast resources to rival the Pentagon, the US Defense Department said in its annual report on Chinese military power, which concluded that the country's armed forces in some areas had eclipsed the US military.The report, released Wednesday (NZ time) by the Pentagon, comes as the US military shifts its focus from Middle East counterinsurgencies that have dominated its operations for two decades toward a possible future conflict with China and Russia, in what defence leaders have dubbed "an era of great power competition."China's armed forces, the Pentagon said, not only are acquiring sophisticated new technology and weaponry but also are overhauling their organisational structures, as China aims to complete a military modernisation by 2035 and establish a "world-class military" that can rival or exceed that of the United States by 2049.Beijing's goal, the report says, is then to leverage its new military might to achieve its foreign-policy objectives in the Western Pacific and to assert itself globally...     more
6架B-52飞抵俄家门口
俄核潜艇罕见亮相美国近海 20200831 |《今日关注》CCTV中文国际
Sep 1, 2020